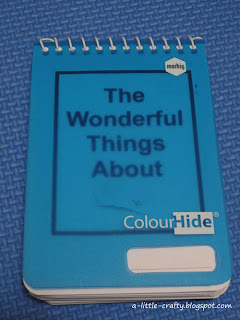 This year Mr 5 started school, and with that has come a blow to his confidence as he encounters his first real bullying. As a consequence he's been asking me to tell him good things about himself. I thought I could do one better than that and so I bought a cheap little pocket notebook, and sat down and brainstormed and wrote down as many positive traits as I could; everything from riding his bike, to having patience, to things he's told me he likes about himself.

Using a word processor I put each possitive affirmation in it's own little box, and printed them out and pasted them into the book. The title of the book is one we brainstormed together.

The super pleased look Mr 5 gave me when he worked out what I was doing, and when I'd finished it, definitely made it a worthy project to have accomplished.

By pure chance I picked out Josh the Robot from the library this week. It's a beautifully written book about being teased and bullied, written by Peter Rowe. And the robot makes it appealing to boys.