So I thought I'd have a second go at the airplane activity tray to go on the tray table of the plane. This should help the kids keep occupied on our upcoming long haul flights, and help to stop toys, pens, pages, forks etc. making a dash for the floor. 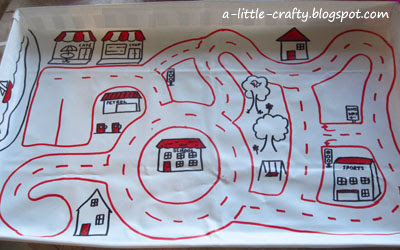 I had been eying off the vinyl table cloth in the shop with roads on it, but it was so expensive, and I already had perfectly good plastic at home... so I decided to turn the trays over and draw my own road. My own? Well, a bit of a co-operative effort with the kids.

Here's how I did it: 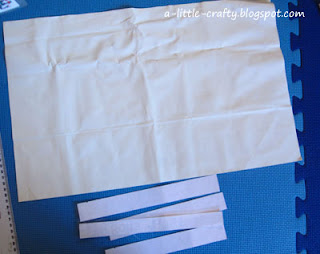 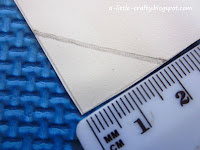 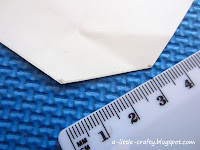 Measure 2 cm from the corners, draw a triangle and cut it off. This makes the corner less bulky when folded. 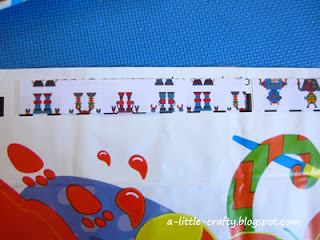 Turn the plastic over, measure half way along the long edge. Place the two shorter strips of laminated paper 1cm from the edge and close to the centre line (but not overlapping so you can fold the tray in half to store/carry). Use sticky tape to hold it in place. 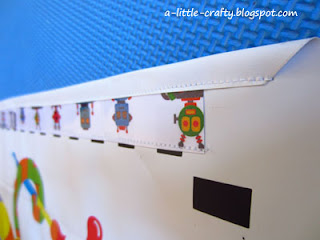 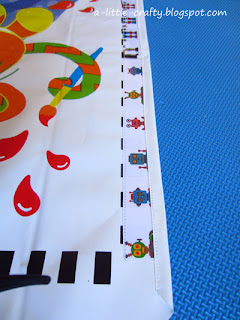 Sew it down, folding over the plastic as you go. 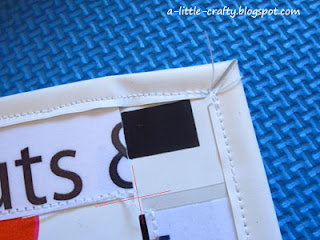 Position the longer laminated paper strips on the short side of the plastic. They should be about 1cm from the edge, but take care that they are corner to corner with the strips you've already sewed on, without overlapping. See the fine read lines in the picture above for my attempt to show this. If they overlap, you won't be able to neatly fold up the sides of the tray. 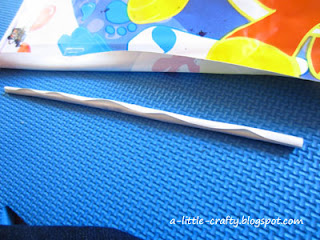 To make the front edge of the tray, take a small left over strip of plastic (about 3cm x 21cm) and roll it into a small roll (or something else soft, on my first version I used wadding, but it was a bit messy). Tape it in place on the front edge, again leaving a gap at the centre line for folding. Fold over the front edge about 1.5cm and sew it down. 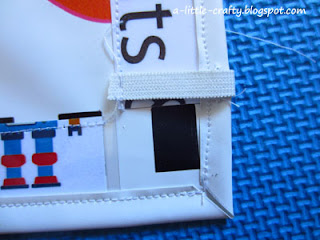 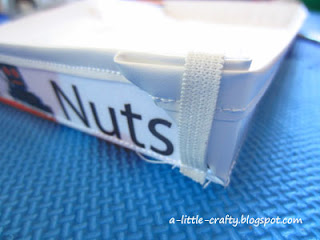 When you assemble the tray, pinch the corner into a triangle and tuck it under the elastic. 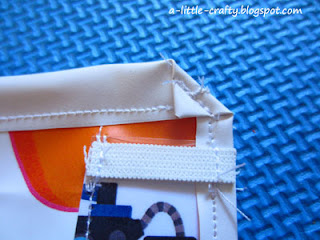 On the front side of the tray, fold over the corner and sew down (it would have been slightly better to sew right down to the corner like I did first time). Sew a 3cm strip of elastic across the end of the laminated paper strip. 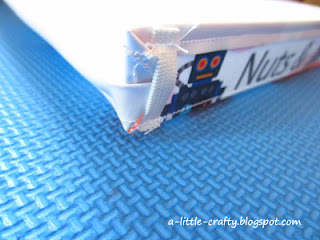 When you fold this corner it, it makes a little triangle that can be slipped under the elastic. 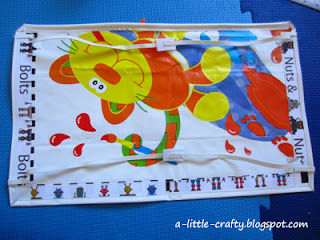 To attach the tray to the plane tray table, I sewed on 4 strips of elastic to the back side. I sewed them slightly inside the laminated paper strips. This makes them on slightly inside the edge of the bottom area of the tray when assembled. (This means if the plane tray table is slightly smaller than expected the activity tray should still sit nicely.) Sew the elastic strips so they are pointing outwards. Sew a rectangle of velcro (hook and loop) to the other end of each piece of elastic.

I decided this would be best because:
1. it seemed simple to do,
2. it gave me two ends so I could adjust the length of the straps a bit to cater for different sized tables,
3. I can open them up and twist them around the back arms to the tray table if needed and
4. I can open them up and push them to the side if I want to use the activity tray on a train or table. 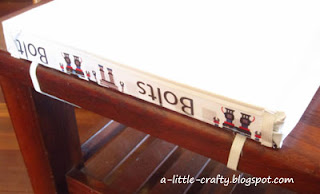 Finished the sewing, now to decorate. 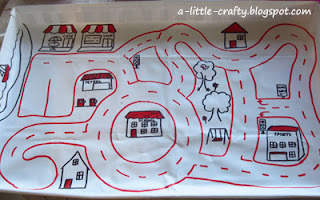 First I roughed out the outline using lead pencil. I only had a black and a red permanent marker in house, so I used them (Mr 5 insisted the roads should be red on his). I then used an eraser to remove any unwanted pencil lines. 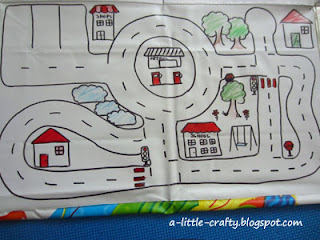 We then found (after trying all the felt tipped pens and finding they all rubbed off) that pencil coloured in beautifully, and wouldn't wipe off with a wet cloth (although can mostly be rubbed off with an eraser), and so the kids could add some extra colour to the pictures.