Mr 6 is right into anything he can play on the tablet right now, especially minecraft. So for his birthday party we had a bit of a computer game theme.

The cake was candy crush (because it was made with lollies, surely you can't get a much easier cake than that!) 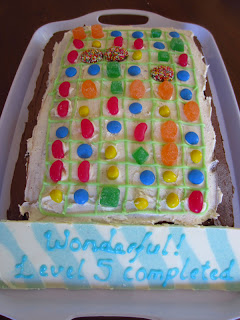 We had one party game. I wasn't sure how it'd go, seeing as I'd just vaguely invented it in my head, but it worked brilliantly and all the kids, from the 1y/o to the 14 y/o wanted to line up and have a go.


The basic idea was we made a giant slingshot (using 8 pieces of 1m long 2x4cm pine, duct tape, dress elastic and a piece of fairly stiff material). We made a pile of old boxes (semi angry birds style) and taped balloons onto some of the boxes. Some balloons had angry birds or pigs drawn on, some had TNT or creepers drawn on. Others were plain. We used the drawn on ones first. The kids thought it was pretty awesome, especially the TNT ones. The original idea was to put chocolates inside the balloons, but that was being a bit too labour intensive, so we just sticky taped the chocolates to the outside.

Each child had a turn of shooting 2 tennis balls at the tower, one at a time. If they knocked down a balloon, they got the chocolate. After everyone had patiently waited 2 turns anyone who hadn't got a chocolate took one from the bag, and then we kept the game going until the adults got sick of supervising. 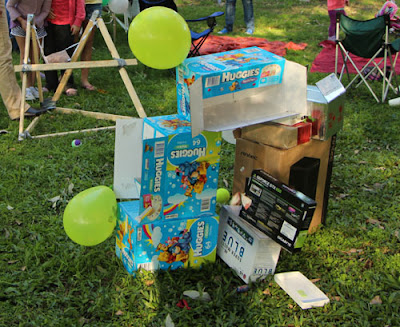 We made some slice to look minecrafty. Unfortunately my photo doesn't look nearly as good as this one, but the slice went down really well. 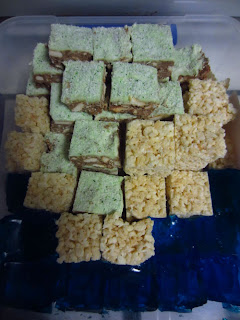 Mine craft slice box recipes:
Sand (mix approximately 4 cups/160g rice bubbles with 180g melted white chocolate and 2 or 3 tablespoons of coconut, press into a slice tray and refrigerate).
Grass (hedgehog slice with green icing sprinkled with green coconut).
Water (blue jelly with a couple of tablespoons extra gelatine to make it strong enough to pick up in fingers).

And last we made up some ginger bread biscuits to go in the party favour bags. Some with green icing to be "grass" and some with white icing for "snow". 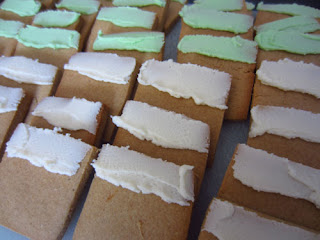