We've done multiple long haul flights (24+ hours) with our kids at various ages between 11mths and 9 years. Here are 10 of our favourite busy bags for the 1-3 years ages group, made using things from around the house:

1. Beach balls. Hands down BEST toys we've ever taken on a plane. We took two and and used them A LOT at the stop overs in Hong Kong airport. We had so many random kids join in or look longing at our family playing with them. Great for all ages 2 to 42! 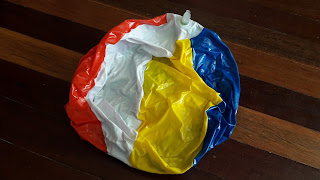 2. Things in a bottle. First version was paper beads made from junk mail in a bottle. This was definitely the  favourite for our 13 month old. Second version was pipe cleaners in a spice bottle, which was more interesting for my 3 year old. 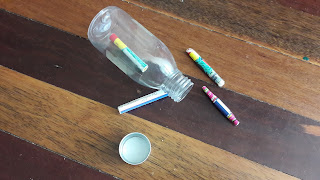 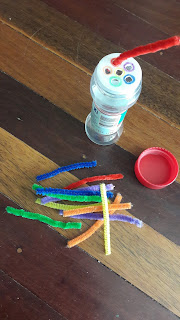 3. Letter writing. This is my 3 year old's favourite busy bag, plane or no plane. We made a bunch of tiny envelopes and packed them in a zip lock bag with some pens, stickers, little notebook and stamps. Hours of fun writing "letters" to all his favourite people. (note: Christmas cards can be a good source of little envelopes) 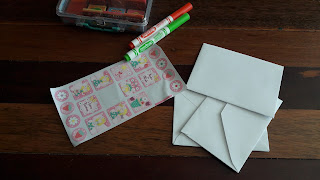 4.  Small bag of figurines. We used old trashies that the kids had mostly grown out of. They acted out all sorts of adventures in the plane seat. 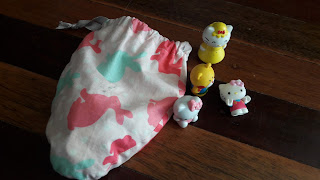 5. Fishing game. Made with soy sauce fish with an old screw glued in the neck and a magnet. 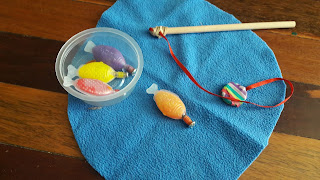 6. Buttons and a toy ute (pick up truck) and digger. A little bag with a collection of old buttons, and matchbox size cars was a big hit. We include a pair of eyebrow tweezers for non-airport travel, making it great for fine motor control play!

7. Small box with loom bands and hook and different coloured box sections. Sort the loom bands by colour. Even better if you can find someone to take turns with!

8. Threading. Pipe cleaners and melty beads in different colours. Match the beads to the pip cleaners. 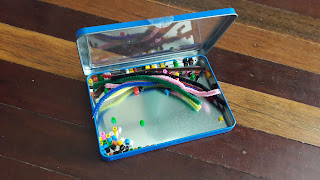 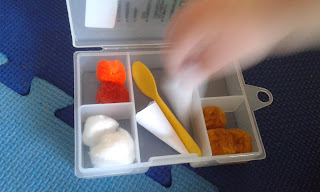 This busy bag cost nothing and took less than 5 minutes to put together.
The aim is to scoop ice cream into a cone and pretend to eat it.

The cones were made from rolled up half circle of paper. The pompoms, spoon and box were all lying around the house.
No comments:

So we booked our tickets for a long haul flight (24 hours including stop in the middle) plus road trip of more than 17 hours in total (over a week or so) and of course the returning flight. With 14/15 month old toddler, a 5 year old and 7 year old.

Then I started googling what to do with said toddler in a plane. Lots of things people planned to do, neat little toy bags etc, but very little feedback of what actually worked.

We've done the flight a few times before so the big kids didn't worry me, we packed their toothbrushes and a tablet, and told them they could have as much screen time as they wanted in the plane. Easy.

Mr 1 was more of a challenge. He didn't like to sit and read books, had a typically short attention span, and his favourite hobby is moving, preferably while holding onto something big and long like a pool noodle. Not useful in a plane.

I packed 4 boxes/bags of bits I hoped like anything would entertain him in the pane and at the different houses and restaurants we'd visit along the way. The pick of the bunch:

The Wiggles.
He'd never seen the Wiggles before, but likes music.He maganed to drift easily off to sleep a couple of times while watching the Wiggles. I just put the sound on very low (and had hubby check that he couldn't hear it from the chair beside). Headphones seemed to irritate him too much, despite the fact that he likes them when he's not tired.

Socks.
For the last hour of the flight over, we played socks on socks off. Boring for me, but kept him seated and quiet when he was at his wits end from sitting still so long. He also laughed when I put his socks on his hands.

Cars.
A couple of matchbox cars that could drive around the table and arm rests.

Things in a bottle.
In one bottle was paper rolls (strips of magazine rolled up tight and then end glued down) and in the other was pipe cleaners. We've also done it with straws or pegs. We tipped them out and he carefully put them back in. This kept him quietly concentrated for ages, and it didn't matter if the bits got lost.


Plastic stickers.
I stuck them on the tray, he pulled them off.


Wind up toys.
Ones I'd found lying around the house or bought for 50c.

Geology eggs, paleontology eggs, dinosaur eggs, gem eggs, dig your own fossil eggs... You know the type. You get the kits where, with a small tool, you can dig a treasure of some sort out of the plaster mix. 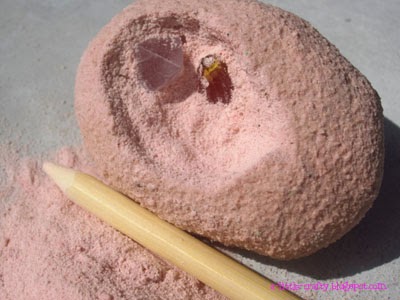 I thought they'd make a terrific party favour for Miss 4's birthday party, however the bought ones cost too much. So here's how we made our own.