The other day Mr 5 asked to do one of the experiments in his science book (Awesome Experiments, by Trevor Cook). We didn't follow the instructions exactly, but the general essence was dissolve sugar in hot water and dissolve salt in hot water, put a string in each solution and wait for crystals to form on the string. The book told us we could use hot tap water that hadn't been boiled.

First we set up our cups. I broke a wooden skewer and tied some string around it (this stops it from rolling off the side of the cup), while Mr 5 labelled which cup was which. Then we stirred as much sugar or salt into the liquid as we could (a little at a time until it would no longer dissolve in the water.) 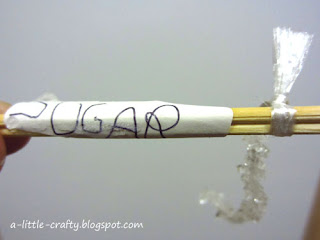 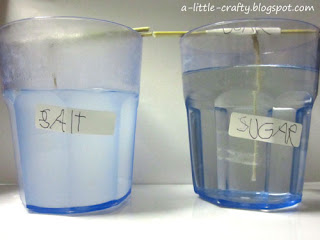 Then we waited and waited and waited. About 2 weeks. Eventually the salt wicked up the string and formed some not very impressive blobby white crystals. The sugar worked better and eventually gave us some pretty sparkly crystals.

I've done the salt before, but always by stirring the salt into a boiling pot of water. The increased temperature allows the water to super-saturate (dissolve more salt than it could have at a lower/room temperature). So I decided to give that a go. This time around I also used cotton thread on the skewers, to minimise wicking. 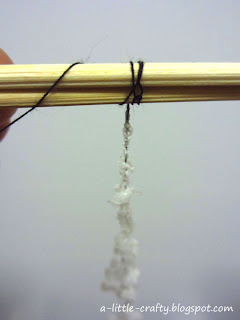 Within an hour we had crystals forming, and by the next day it was finished.

I had never made the sugar crystals before and was a little disappointed to find they made crystals with a fairly square structure, like the salt. I was hoping they would be a very different shape so that we could talk about molecular structure a bit. But apart from that it was a very satisfying experiment.