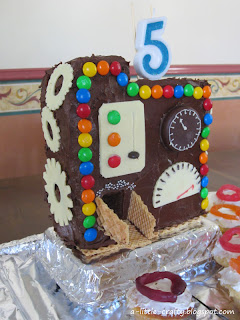 So here it is. The most adventurous cake I've ever made: a marble race machine cake. Designed for a round lolly to roll through it and out onto the top of a cup cake.

And it actually wasn't as difficult to make as you'd think.

I baked 3 cakes in a bread loaf tin, and froze them. I then cut them into flat sided rectangular blocks. I then cut some tracks into them, which was a little fiddly. The tracks went something like this: 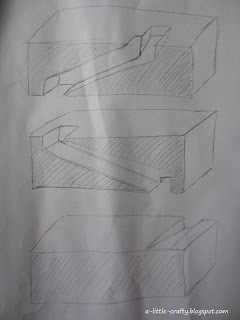 I stacked it all together (using chocolate butter icing as the glue) and tweaked it until a Jaffa/Malteser would roll down without getting caught. I used icing to stick wafer biscuits onto the back to stop the Jaffa from flying out at any stage. There are more wafer biscuits under the bottom of the front of the cake, because it was doing a small leaning tower impression. Finally the whole thing was held in place with some skewers from top to bottom, and a few tooth picks for any pointy bits that looked like they needed a bit of extra support (i.e. where the track turned and under the spout at the front). 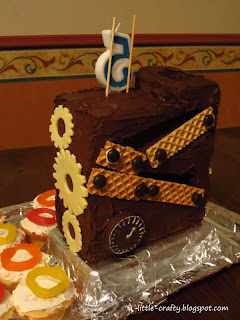 The decorations were made from white chocolate or mint chocolate biscuits. I melted the white chocolate into a sheet 2 or 3mm thick, and when it had hardened I cut the shapes out using cookie cutters. The gears were made using 2 circle cutters, and the tip of a star shaped cutter for the grooves.

And just to prove it really worked, here's a video from the front, and a second one from the back.

The kids at the party each got their own cup cake (topped with a lolly snake to make a catching ring) and rolled their own Jaffa through the machine to top it. The Jaffas worked better than the Maltesers perhaps because they're smaller and sugar coated.

The birthday boy was very very happy with it. Mission accomplished. :)